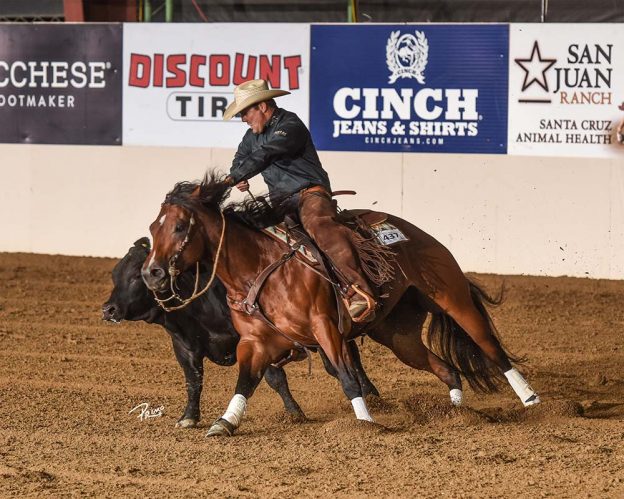 The CD Survivor Memorial Open Bridle Spectacular, named in honor of the late, great stallion owned by NRCHA breeder sponsor Holy Cow Performance Horses, is a $25,000-added event that is filled with some of the best horses and horsemen and women in the country. With entry numbers nearly double over last year, twenty-eight of some of the most elite reined cow horses and trainers took center stage at the Heart Equestrian Center, completing the triathlon of herd work, rein work and fence work in one afternoon. Energy and excitement filled the air, as owners, riders and fans searched for an empty seat or place to stand to watch the thrilling fence work.

An incredible fence score of 227.5 came from CSR Lay Down Sally (Dual Spark x Look At Her Glo x CD O Cody) and NRCHA Professional Chris Dawson, giving them an eleven point lead over their fellow competitors. The team’s composite of 670 (219 herd / 223.5 rein / 227.5 cow) secured the coveted title of 2018 CD Survivor Memorial Open Bridle Spectacular Champion, along with a CR Morrison resin trophy sponsored by Will Rogers Memorial Center, a Gist buckle, product from Platinum Performance and an $11,675 paycheck. The 2011 mare is owned by non pro competitor Meredith Graber, who just six days earlier, captured the Non Pro Bridle Spectacular Championship, aboard “Sally”. Graber bought the mare as a five-year-old and showed her in the boxing Derbies through her six-year-old year. According to Dawson, Graber’s trainer, Graber is the one who has spent the most time putting CSR Lay Down Sally in the bridle. Sharing an Open and Non Pro horse does not come without it’s challenges, but Sally, Graber and Dawson seem to make it work well. “Meredith is such a great rider. Sally keeps Meredith safe while learning to go down the fence, then I can put more pressure on her for the Open,” Dawson said.

“Everything felt aligned today. Sally always feels good,” said Dawson. “She found some gears tonight I wasn’t even sure she had. Every time I show that mare she just gets better. She is a super horse and she has a lot of heart.” “They [Holy Cow Performance Horses] have been such great supporters of the bridle horses. The purpose of this is to build bridle horses,” Dawson stated. “These bridle horse classes are so nice to be able to give the owners an incentive to keep a horse in training and let the horses progress through the stages of training.”

The Dawsons and the Grabers are a big help to one another. “The Lord puts good people and horses in your life. The Grabers are awesome people,” Dawson said. He also thanked his wife, his assistants, his herd help and the whole reined cow horse family. Graber wanted thank the team at Dawson Performance Horses, her family and her horse show family. “Without them, none of this would be possible,” stated Graber.

Click here to read about Bridle Spectacular winners from past years.